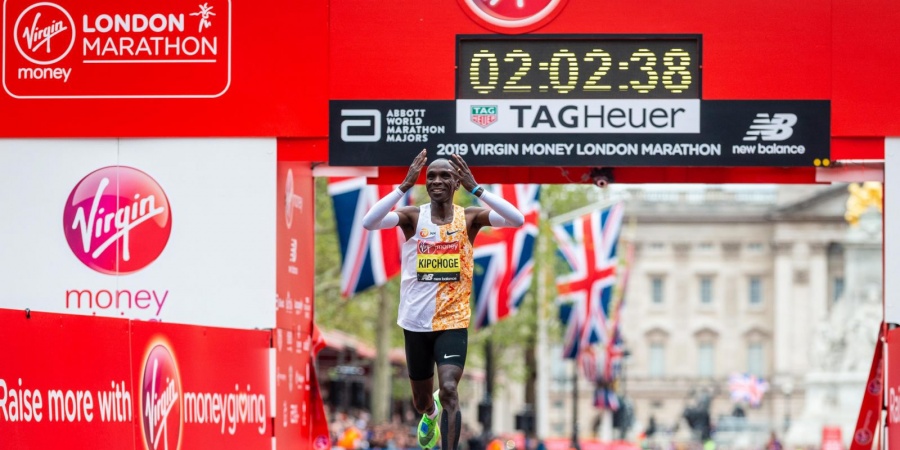 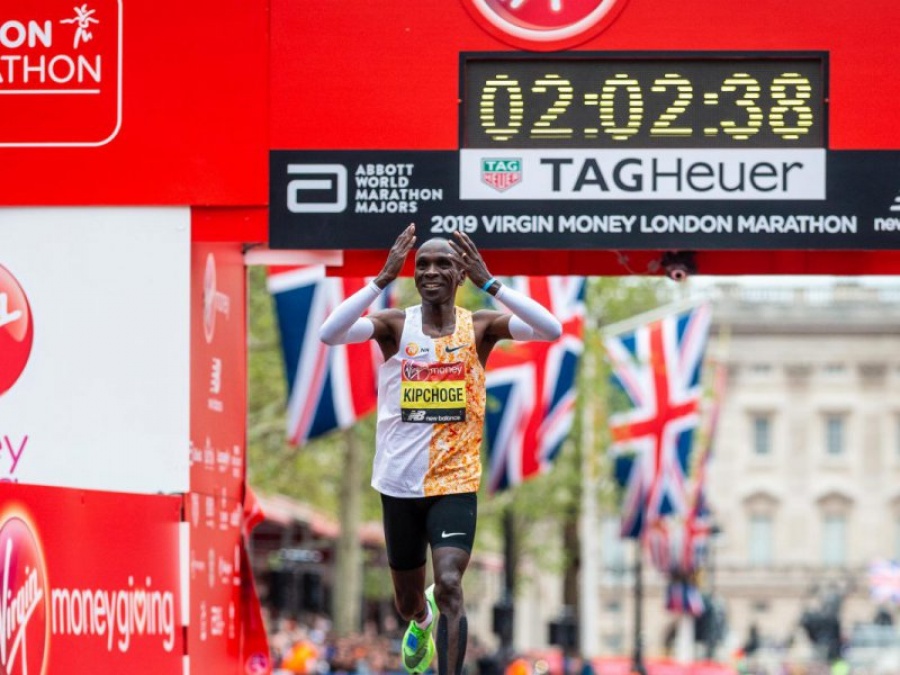 Despite poor pacemaking and windy conditions, Eliud still managed to record a winning time of 2:05:00. A 5km split between 30-35km of 14:33 – the fastest of the race  – proved decisive on his way to a comfortable win.

“If we had run a faster first half of the marathon (which was reached in 1:02:40 some 40 seconds slower than the race organisers had in mind), the results would have been better. I lost a bit too much energy picking up the right pace.”

The devastating 5km split between 30-35km offered a glimpse of his star potential.

Eliud defeated his track nemesis Kenenisa Bekele with a quality display. Covering the 35-40km segment in 14:32, the fastest split on that part of the course in race history, he stopped the clock in 2:04:11 – six seconds shy of his PB. Bekele was back in fourth.

“This is my fourth marathon and now I understand. I can say today, I am fully experienced. The race was a real race.”

His maiden success in the British capital, required a strong final 800m to kick clear of Wilson Kipsang – the only man to ever defeat him over the classic distance. His time of 2:04:42 earned him a five-second victory.

“This was like a major championship. It was like an Olympic Games. I was a little bit scared of the competition but I was very confident by the time we got to 40km.”

Another feather in Eliud’s cap, his defeat of Kipsang and world record holder Dennis Kimetto was another stepping stone on the road to greatness.

A remarkable act of mental fortitude by Eliud who won the race despite his insoles hanging loose for much of the race. He stopped the clock in a PB of 2:04:00 – to finish almost a minute-and-a-half clear of the nearest opposition.

“It wasn’t a good day for me in these shoes, although they’re actually very good. I tested them in Kenya but just had bad luck on the day.”

The marathon which perhaps first clearly identified the unique mental strength of a very special athlete.

“My coach told me I am the best in the field, so as the best I should go with the pacemakers. It was a good course. The support was perfect – the crowd was fantastic and it was good to get a PB.”

If any doubt remained, this was the performance which proved the world record was within reach for Eliud.

Running the second half of the race more than three minutes quicker than the first half, propelled the Kenyan marathon running icon to gold in 2:08:44. His winning margin of 1:10 was the biggest at an Olympic Games since 1972.

“It was a bit slow, so I decided to take over. I was coming for gold. It feels great. This is the best win of my life.”

After taking Olympic 5000m bronze and silver medals at the 2004 and 2008 Games, Eliud first Olympic gold medal cements his status as the world’s greatest marathon runner in history.

Eliud tamed the rain and a gutsy display by the pugnacious Guye Adola to win a time of 2:03:32. With 5km remaining, the Ethiopian took a slight lead of around two or three seconds only for Eliud to reel him in and claim the victory in taxing conditions.

“That was definitely the hardest marathon I’ve ever run. He (Adola) was a big surprise. When just the two of us were left, I had to concentrate fully on finishing. I was happy to win.”

He once again manages to repel a significant challenge with the inclement weather likely denying him the world record.

The hottest London Marathon on record held no fears for the remarkable Kenyan as he racked up a third race win on the streets of the British capital – in a time of 2:04:17. Once again a plucky Ethiopian – Shura Kitata – was his main challenger but the 24th mile – covered in 4:44 by Eliud – proved decisive.

“At some points I was a little bit worried. I had to fight in the last kilometres. I can say I enjoyed the race, and I’m happy to be able to win for the third time in London.

After the rain of Berlin, the heat of London proved no bar for king Eliud as he once again rose to the challenge.

In perfect conditions, Eliud delivered by stopping the clock in a new world record mark of 2:01:39. In a staggering display of distance running, the Kenyan wiped one minute and 18 seconds from Dennis Kimetto’s previous world record time. It was the single biggest world marathon record improvement for 51 years.

“I lack the words to describe how I feel. It was always my ambition to smash the world record, and I felt very confident. I’m really grateful to my coaching team, my management, the organisation.”

Quite simply the race that sealed his genius. Eliud finally pocketed the one missing element to his otherwise impeccable CV.

Eliud runs the second fastest marathon time in history and also bags an unprecedented fourth men’s London Marathon success with yet another mind-blowing performance. The Kenyan defies a powerful Ethiopian challenge to stop the clock in 2:02:37.

“I am happy to win on the streets of London for the fourth time and to make history. The crowd in London is wonderful and the spirit pushed me. From the first kilometre to the last, everybody is shouting. I’m happy to cross the line.”

Yet more evidence of Eliud’s awe-inspiring ability as yet again he beats all-comers to create history.

***Note, we have not included Eliud Kipchoge’s scarcely believable time of 2:00:25 for the Nike Breaking2 as this race was not under official IAAF rules.  This was his first race in NN Running Team colours.