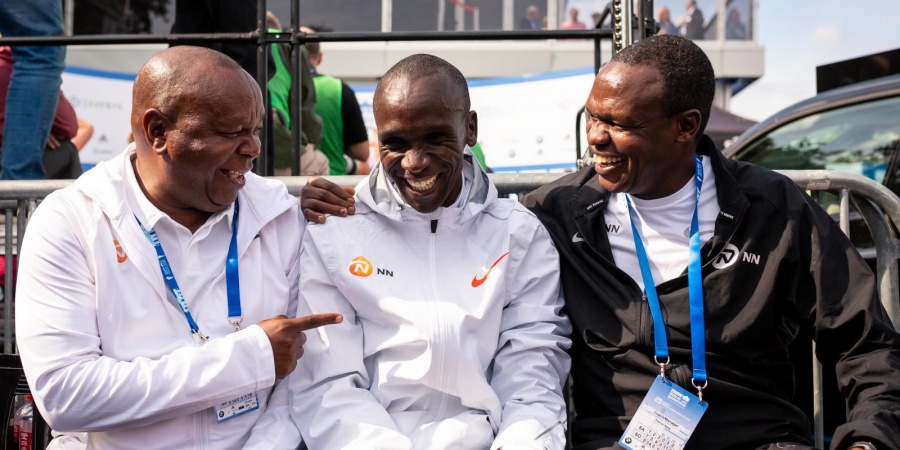 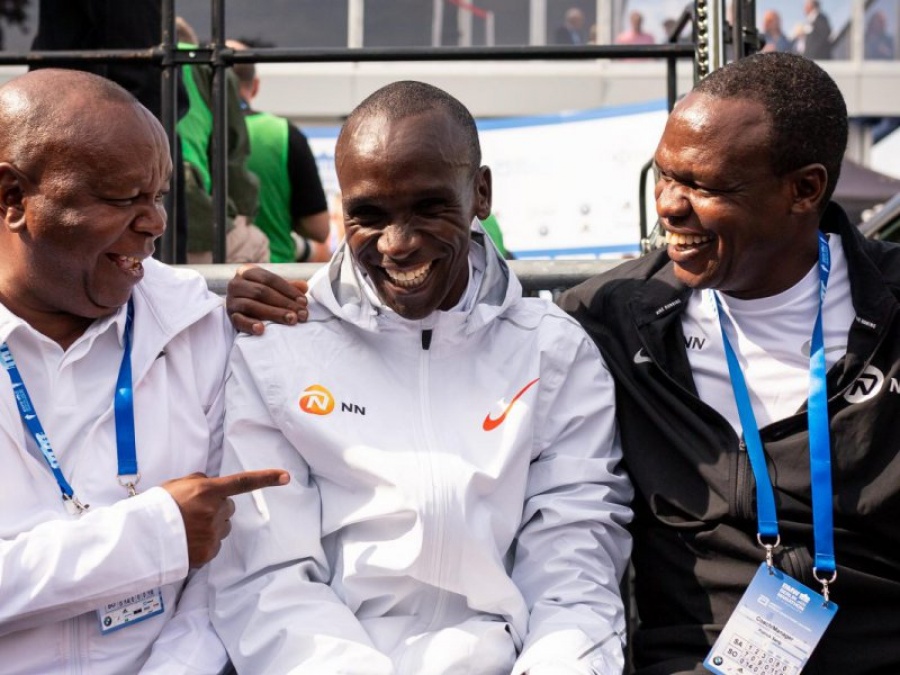 The support team for the NNRT athletes on a race week is significant. We speak to a quintet who were on hand to offer their assistance at the recent London Marathon to find out more about their respective roles.

The long-time physio to Eliud Kipchoge believes his role on a race weekend is to provide as “little stress as possible” for his athletes in the nerve-jangling final days and hours ahead of the race.

“In terms of the preparation, the coach will do his bit, the athlete plays his part and I am just another of the pieces that makes the whole,” explains Peter, who has worked with Eliud for the past 16 years.

Typically arriving five days before the marathon – Peter has a well-honed programme to perfectly suit the needs of the global marathon superstar.

Within hours of arriving at the hotel, Peter will carry out a deep massage and stretches  – to ensure Eliud’s muscles and primed, stretched and lengthened and the hip joints and neck etc are free of stress, fatigue and that the body is fully mobilised.

The next day will involve more stretching and on Thursday the final deep massage will take place.

“The deep massage does not suit all athletes,” he explains. “Other athletes prefer a soft massage. The hard massage is not sweet. It is painful.”

The Friday on race week will involve more stretches with Peter focusing on the joints, hip joints and ankles for flexibility.

On race day, before Eliud and the pacemakers board the bus to the start line, Peter’s role will be to “prime” the muscles. Then one final rub will be completed before the race .

Some two hours after the race, Peter will set up a post-race ice bath and a massage for Eliud to help his body recover.

“My aim is to help the athletes’ perform with as little stress as possible,” he says. “If I do that, I feel like I have positively contributed.”

Boasting a vast experience in the role, the NNRT manager for the Kenyan athletes insists during a race week his role is to principally manage any unnecessary distractions.

“With Eliud or any other athletes coming into the race they have obligations for the race organisers and sponsors and our role is to plan everything correctly,” explains Valentijn. “We also have to make sure the athlete receives massage, all meals are organised and the training location is good. For us, it is to plan everything in a way that is of the same quality as at their regular training base.”

In the final days or hours before a big marathon or championship any slight injury can cause alarm. Some athletes can be prone to panic and under great stress bad decisions can be made.

“It is important as a manager to keep calm and organise things in the right way. It helps too to have a good relationship with the athlete – a trust that is often built up over many years.”

The nature of the challenges can be broad and even for an experienced manager race weeks can create tension.

Dan Vernon – The Photographer and Videographer

For the NN Running Team’s man behind the lens, his role during a race week it is to generate the creative content which best helps explain the story of the team.

From introducing the athletes through their pre-event training and race day experience to attending press events or spending time with the athletes in their downtime, Dan is the man assigned to bring the visual content to life.

“We plan every weekend and put a schedule together of how everything is theoretically going to work out,” explains Dan. “The great challenge is the course, which obviously differs from one race to the next.”

To grab the right images and video during a race in a challenging environment is a far from a straight forward role. However, despite scouting the course in advance to identify the best vantage spots – this does not always guarantee the perfect shot.

“You can organise your shot but usually whatever you have planned will rarely happen,” explains Dan. “You might be in a certain position and then someone with an iPad will stand in front of you. You might have the perfect shot lined up and then suddenly four people in his-vis jackets will stand in the frame.

“As the athletes are running towards the scene unfolds very quickly, so you need to make some quick decisions.”

Through experience, skill and a certain degree of luck, Dan has proved the man with the Midas touch turning in countless inspirational images and video which have helped frame the NNRT narrative and created millions of impressions globally.

The work can be physically and mentally draining and race weeks after often hectic with early starts and late finishes but for the British content provider it is hugely satisfying role, and one which he feels immensely privileged to have played his part.

“The weekends are high-intensity but to created something which has brought about so many positive reactions has made it such a cool job.”

The man who works on the food and drinks intake of the leading NNRT athletes modestly states: “my role is make sure nutrition should not negatively impact on an athlete’s performance.”

However, there is little doubt Armand’s work with the leading NNRT athletes has unquestionably played a part in their success.

Much of Armand’s work is carried out in the months leading up the race in which he will spend periods during training calculating the minimum and maximal fluid and food intakes required to maintain optimal energy levels during a race day environment.

During a race week the leading NNRT athletes will then take in board nutrition provided by sous-vide – a form of cooking in which the food sits in a water bath for a longer than average cooking time to ensures the nutrients of the food remain of the highest quality.

Armand will often arrive two days before the marathon and talk to the athletes and ask general questions about their overall fitness and wellbeing. He will then prepare their individualised race-day fluids and in the case of Eliud – prepare his pre-race oatmeal breakfast.

He will then keep a close eye on the action via the TV monitor at each drinks station.

“During a race is very little I can do, but I’m obviously looking to check if he is executing the plan as tested in training sessions,” says Armand, who also works with leading Dutch football team Feyenoord and numerous Dutch Olympic athletes. “It is obviously hard to tell during the race and I count the seconds the drink is in the athlete’s hands and how many sips are taken. There should be a minimum amount an athlete consumes.”

Once the race is complete, Armand takes understandable satisfaction from a good performance. However, he adds: “I’m always my harshest critic and after each race I’m always looking at ways we can improve further in the future.”

If the marketing manager’s role on a race week could be compared to that of any athletics discipline it would be that of a decathlete.

Planning a range of meetings with sponsors, handling all the media requests and overseeing the NNRT content requires a varied skill-set which requires Marleen to consider numerous factors and to be able to think on her feet.

Time can be squeezed and the hours long, but whatever decisions are made she insists the athlete always needs to be the priority.

“From a media point of view I’ll make the decision who we do and don’t give access to, which is really tough because Eliud and the NN Running Team have become so high profile,” says Marleen.

“Everyone wants something on a race week, particularly from Eliud and the pressure is immense. Saying no to someone is not easy and finding that balance between giving everybody what they want and protecting Eliud is the toughest part of the job.”

Marleen admits during the race itself she can feel the tension and nerves and jokes if she is following the fortunes of the race in hospitality, she is not always the best conversationalist as she becomes absorbed in the race.

The Dutchwoman insists another key element to her role during the race weekend is not only maintaining a healthy relationship with existing sponsors but reaching out to new potential sponsors to further grow the sport.

However, ultimately, the success of a race week is typically defined by one fact – winning

“Of course, if our athlete wins that is important. We look to produce great content but the whole atmosphere and engagement around our content is totally different if we have a winning athlete as opposed to on a weekend where our best performance is fourth or fifth.”